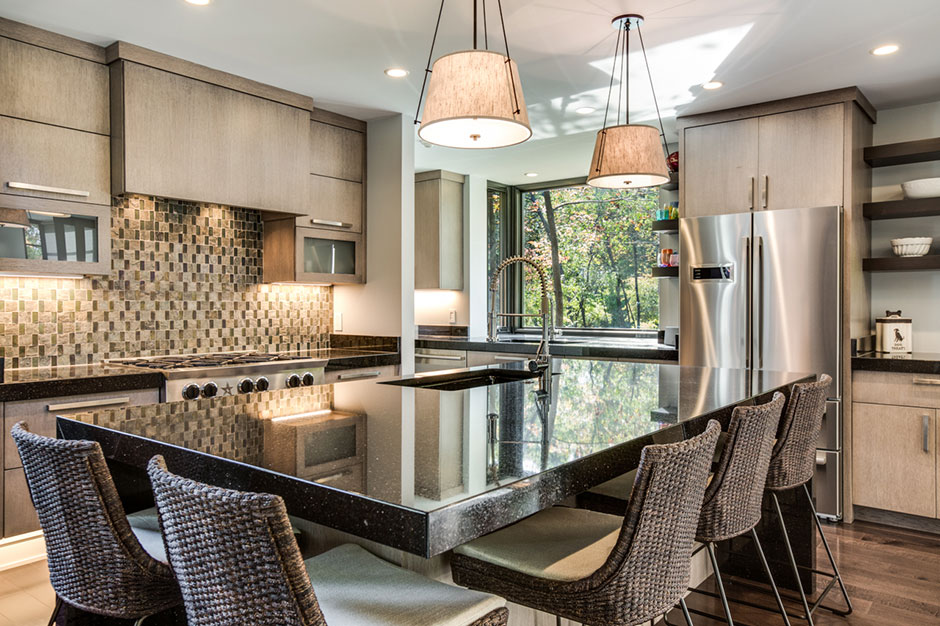 When children grow up and leave home, the parents have a chance to reassess their wants and needs in a house. After their daughters left for college, one couple in Cleveland, Ohio, decided they wanted a modern home to entertain friends, store their art and books and have their children visit for holidays.

“The clients wanted this house to be able to sustain them during the empty–nest years,” said designer Jill Calo of Chardon, Ohio-based Payne & Payne Renovations & Design. “They asked for the home to be contemporary but not cold.”

Making a Connection with a Functional, Warm Kitchen

Calo was charged with designing a streamlined kitchen with a spacious layout and a welcoming atmosphere. The resulting floor plan features several prepping areas and a large kitchen island, as well as a small alcove for the pantry and the ovens. While the kitchen is at a standard ceiling height, it is open to the adjacent two-story living area and feels like part of the grand space.

“I love how connected the kitchen is to the rest of the home and how the more secluded pantry and double oven area hides any mess from daily use,” said the designer, who used AutoCAD and Sketchup to lay out the space and present it to the client.

“Along with choosing warmer materials, we achieved this cozy feel by layering the elements in the space, including the wood floor, open floor joists, metal trusses and tile textures,” she said.

The open floor joists and metal trusses in the attached living area recall the history of the town in which the house was built. Predominately established in the first part of the last century, Cleveland is often referred to as the heart of the Industrial Revolution. Calo wanted to honor that and instill a sense of modern charm in the design by including these industrial components.

Since the showers have no doors, both spaces are essentially wet rooms. To accommodate those, the design team used waterproof porcelain tile on the floor and shower walls in both areas. Linear drains keep the water from spreading too far from the shower.

While his bathroom features porcelain tile on the floors and the walls of the shower, her bathroom has a stacked natural stone on the tub deck and one wall of the shower. The stone includes the same mix of neutral colors from the porcelain tile and complements the dark vanity and white quartz countertop. This lighter top keeps the bathrooms from becoming too dark.

“There was a deliberate effort to have something unique or charming in whatever direction you look,” said the designer, who also included glass mosaic tile around the tub. “The result is a clean and comfortable design.”