RIP the white kitchen? Make way for metals you want to look unpolished? We polled over 100 designers for predictions on what’s trending and ending in 2018. Here’s the consensus 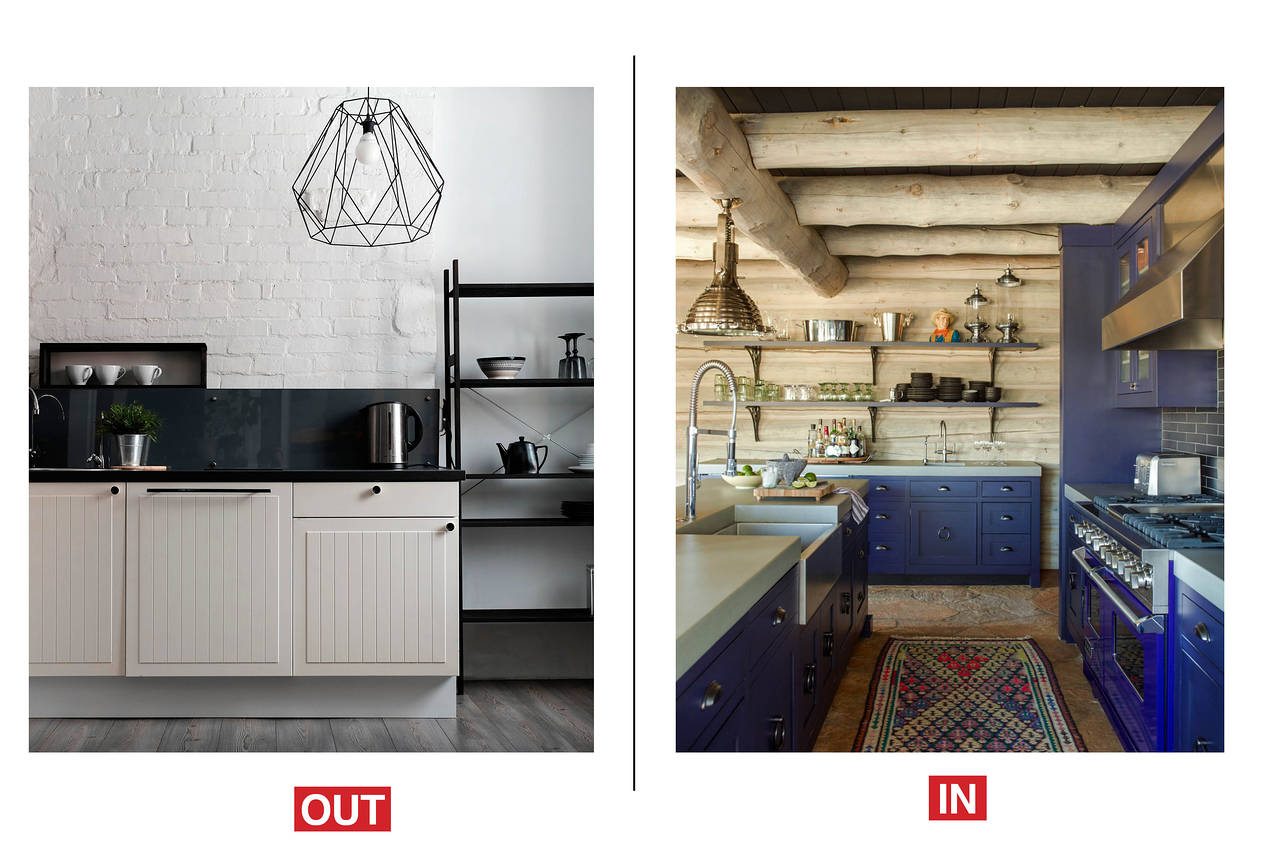 Many of the designers we surveyed forecast a 2018 expiration date for kitchens that resemble forensic labs, heavy on stainless steel, gray or—the most overplayed tone—white. “I feel like white kitchens are so expected these days that we’re just tired of seeing them,” said Dallas interior designer Jean Liu. “They can also be scary, especially for families with children. From counter tops to cabinets, keeping them clean is a challenge.” Conceded North Carolina designer MA Allen: “The all-white kitchen is such a classic, it’s hard to say it’s reached its peak, but in 2018 I think people will want a more unique look of their own.”

“For 2018 we can expect to see an increase of color in kitchen designs, from the cabinetry to the sink materials,” said Houston designer Nina Magon, who foresees basins in granite and concrete as well as copper. U.S. companies are offering exuberantly toned enamel stoves, which have long warmed French and English kitchens. Viking, the maker of the stove in the above Colorado kitchen by designer Thom Filicia, offers ranges in apple red, cobalt blue and Bordeaux. BlueStar offers appliances in 750 color options. “Kitchens are treated more like living and dining rooms,” said New York designer Vanessa Deleon. Their design is following the general wave of layered eclecticism.

“Predictable [floral] prints and repeats don’t add any excitement to upholstery, but they were very popular with the maximalist trend last year,” said New York textile designer Michele Dopp of the bold botanicals that got tangled into the more-is-more aesthetic. Rhode Island furniture and lighting designer Asher Dunn said of classic, chintz applications, “I actually have very fond memories of the traditional floral upholstery in my grandparents’ home, but florals have run their course.”

IN: Distilled Flora and Fauna

Meanwhile, abstractions of nature are heating up. “Nature will always fascinate,” Mr. Dunn observed, “and bio-mimicry is an intuitive next step in bringing the outdoors inside in an abstract and visceral way.” Rebecca Atwood’s Blooms Wallpaper, above, exemplifies the trend, evoking nature with randomly scattered biomorphic shapes. “An all-over organic approach to pattern feels more honest than rigid patterns that you can see stop and start,” said Ms. Dopp, who took a cue from stone veining for one of her recent textile designs.

“It’s like ‘Fifty Shades of Grey’ in a lot of Pinterest images,” lamented Boston designer Erin Gates of the smoky-colored paint phase that once seemed cool. “Without any contrast, gray can feel tired and uninspiring,” cautioned Johanna Uurasjarvi, creative director at West Elm. “We’re long overdue for the return of color in décor.” But will the drab habit be hard to quit? “The only gray we see standing the test of time is very subtle,” said East Hampton architect Erica Broberg Smith: “Off white with a tinge of cool gray will outlast the dark and heavy trend.”

“This year will bring more soft pastels, gentle colors that appear in nature, and oak-hued wood finishes,” predicted New York Designer Ámbar Margarida. Fellow New York designer Ghislaine Viñas pointed out that these pastels aren’t pure but rather have been muddied with earthier tones in the mixing process—see Benjamin Moore’s Silver Marlin and Farrow and Ball’s Cinder Rose andCooking Apple Green, shown above.. “We’ll see mint greens mixed in with jades and sages and other combinations working off some very grounded mustard tones,” she added.

So long, strict linearity. “There’s an uncomfortable neatness that comes with hard lines that people are opting away from these days,” said New York designer Tina Ramchandani, invoking the boxiness of Midcentury Modern credenzas as well as sofas with rigid cushions and unbending arms. “Everyone used to show off their overly formal living room with stringently shaped furniture that no one ever sat in. Now people think of that as unwelcoming and outdated.”

IN: Not Broken, Just Bent

Spit-shined drawer pulls, faucets, and even sinks are starting to look like glaring mistakes. “Slick metals seem as though they belong in a diner with bad vinyl furniture,” said Nashville designer Jonathan Savage of treated metals such as chrome and titanium, which remain impersonal and pristine no matter how often they are touched. “Rose gold faucets and shiny copper can also read as cheap and trendy,” warned Boston’s Ms. Gates. “Anything that looks bright and new and like it was mass produced in China yesterday is something we run away from,” said interior designer Chad James, also of Nashville.

“For a more relaxed, residential environment, we lean toward living metals that show someone actually lives in the home,” said Mr. Savage of finishes that develop character over time, like the above unlacquered-brass shower controls by Waterworks. Pale composite white bronze, which also patinates, is seeing more use. “It’s richer and more substantial than nickel,” said New York designer Alan Tanksley. The au courant will say goodbye to stainless steel kitchen sinks and choose living metals such as copper, said San Francisco designer Grant Gibson. “There’s something nostalgic about metals that have warmth and evolve with the oils of someone’s hands,” added Mr. James.