Born and raised in Cleveland, Ohio Chef Michael Symon is now a chef, restaurant owner, and author.  After graduating from the Culinary Institute of America in New York he worked for many of Cleveland’s top restaurants before branching off to open his own.  Since being named a Best New Chef by Food & Wine magazine in 1998, Symon and his restaurants have been awarded numerous honors.  His flagship, Lola which opened in 1997 and is now the cornerstone of Cleveland’s dining scene was among “America’s Best Restaurants” by Gourmet magazine in 2000.  Lolita, a Mediterranean-style bistro in the historic Tremont neighborhood, opened in 2005.  In 2009, Symon earned The James Beard Foundation Award for Best Chef Great Lakes.  Roast brought Symon’s meat-centric cooking to Detroit in 2008 and the Detroit Free Press named it “Restaurant of the Year.”  B Spot followed in 2009 which Bon Appetit magazine included on their list of “Top 10 Best New Burger Joints.”

Symon made his debut on Food Network in 1998 with appearances on “Sara’s Secrets with Sara Moulton,” “Ready, Set, Cook” and “Food Nation with Bobby Flay,” before being tapped to host over 100 episodes of “The Melting Pot.”  He then went on to win Season One of “The Next Iron Chef” in 2008, earning a permanent spot on the roster of esteemed Iron Chefs.  In January 2012, Symon’s show “Symon’s Suppers,” premiered on Cooking Channel, and in September 2011, he joined the cast of ABC‘s “The Chew” as one of the show’s five hosts.

Chef Symon published his first cookbook, “Michael Symon’s Live to Cook – Recipes and Techniques to Rock Your Kitchen“, in 2009, sharing home-cook friendly recipes that draw on the flavors of his heritage.  His second cookbook, “Carnivore“, dedicated to meat lovers, was published in October 2012 and his third cookbook, “5 in 5“, inspired by a popular speed-cooking segment on “The Chew,” was published in September 2013. 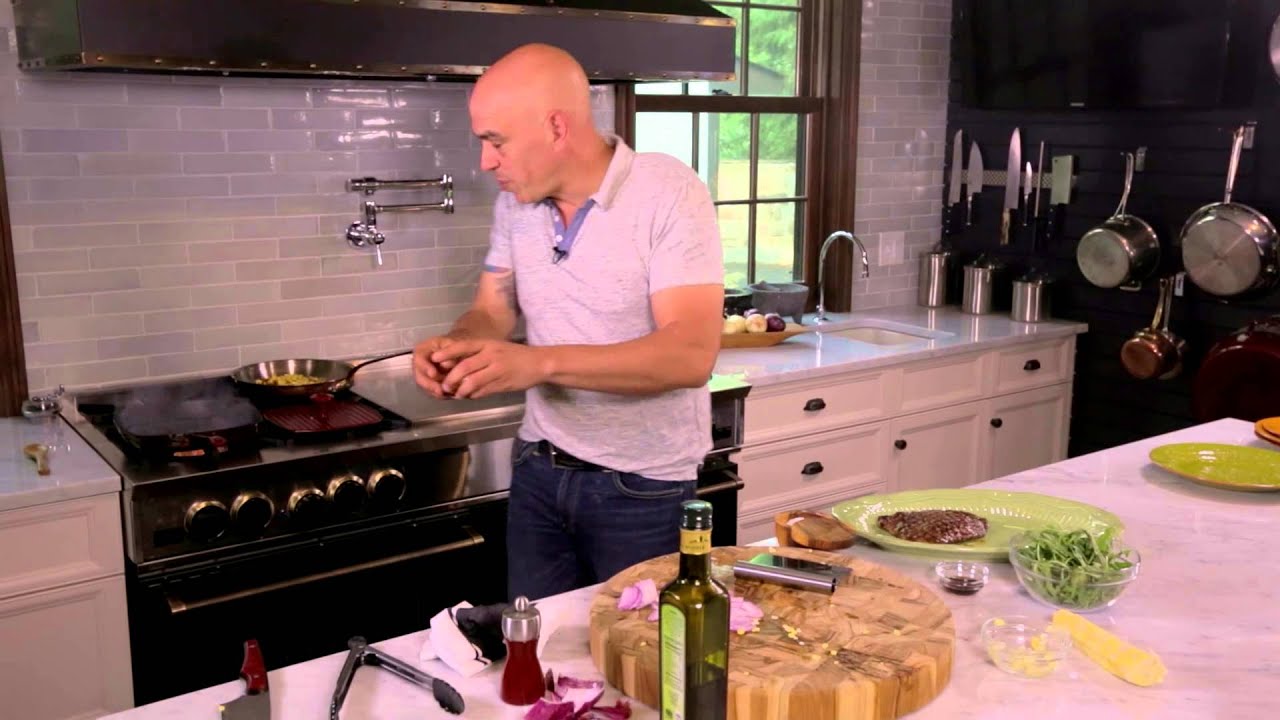 1) Preheat a grill or grill pan to medium-high heat
2) Season the steak on both sides with salt and black pepper. Drizzle with 3 tablespoons of the olive oil, put on the grill, and cover. Cover and cook until nicely charred and the meat releases from the grill, about 3 minutes. Flip and cook until medium-rare, about 2 minutes.
3) Meanwhile, put a large skillet over medium-high heat. Add the remaining 1 tablespoon olive oil and the bacon and cook until almost crisp, about 2 minutes. Don’t drain off the fat. Add the corn and cook for 2 minutes. Add the red pepper flakes and 1/2 cup water and deglaze the pan, scraping with a wooden spoon to get up the browned bits on the bottom of the pan. Stir in the vinegar. Taste and adjust the seasoning, adding salt and black pepper as needed.
4) Remove the steak to a cutting board and slice against the grain. Top with the corn and bacon, arugula, and onion and serve.