Bloodlines count. If you are the daughter of Suzanne Rheinstein, a renowned decorator and the proprietor of Hollyhock, a beloved resource for Los Angeles designers for three decades, it is perhaps not surprising that you might open your own design shop.

And, in fact, Kate Rheinstein Brodsky’s shop, KRB, on Manhattan’s Upper East Side, is, in many ways, an update of her mother’s late, lamented emporium. It is one of the city’s last distinctive home shops, where antiques mix with vintage glassware and china, colorful lampshades, lacquer furnishings by Miles Redd and Jeffrey Bilhuber, and handmade pieces by artisans such as Marian McEvoy and Frances Palmer. And none of it is for sale online.

That kind of quirky embrace of the past, while making it pertinent to the present, is also abundantly evident in the East Hampton weekend house Brodsky shares with her husband, Alexander, who works with his family’s real-estate firm, and their three daughters, Beatriz, 12; Frederica, nine; and Delphine, four.

The family were frequent visitors to the Hamptons, where Alex’s parents and sister have long maintained retreats. But securing a place of their own would be a challenge. “Alex always felt that he would never find anything he loved as much as his parents’,” says Brodsky. And they were restricted geographically. “In the Hamptons, if it’s not around the corner, it might as well be in Alaska,” she adds with a laugh.

In fact, the ramshackle house they discovered five years ago had little more going for it than its nearby location. “It was on what they called the ‘second dune,’ so it’s not on the water, but close,” Brodsky explains. It was sprawling but narrow and had been rented out for decades, and suffered the corresponding wear and neglect.

Yet, Brodsky says, “I knew right away this was the one. It could absorb a lot of people, but not feel lonely if it was just us. And it could be wonderful for the girls and their cousins, with places to read books, and nooks and crannies for them to hide and to build forts.”

But if American weekend traditions haven’t changed much, zoning restrictions, building codes, and environmental ordinances certainly have. And the house barely conformed to any of them. To remedy that, she called on Bories & Shearron Architecture, the firm that had worked on the family’s Manhattan apartment.

“The house was built in 1901,” says Dick Bories, “and it was still standing on its original posts. It was a super-humble beach house perched on a dune to catch the breeze. Some houses have a high-low aspect—this house was low everywhere.” Of the three-year renovation, James Shearron says, “We tried to imagine the house as it might have been at its most dignified. We embellished it without altering it.”

“There was so much unsexy stuff we had to do,” adds Brodsky. “We had to jack it up and put in a foundation. But we didn’t change the layout. We added the screened porch because I am the child of a Southern mom, and we could simply not not have one.”

For furnishings, Brodsky knew exactly where to turn. “I was so lucky with all the pieces Suzanne offered me. Many of them had been in my home in Los Angeles when I was growing up. Of course, I am heavily influenced by my mother, though our color palettes are very different. We love the same things, but we see them in a very different way.” 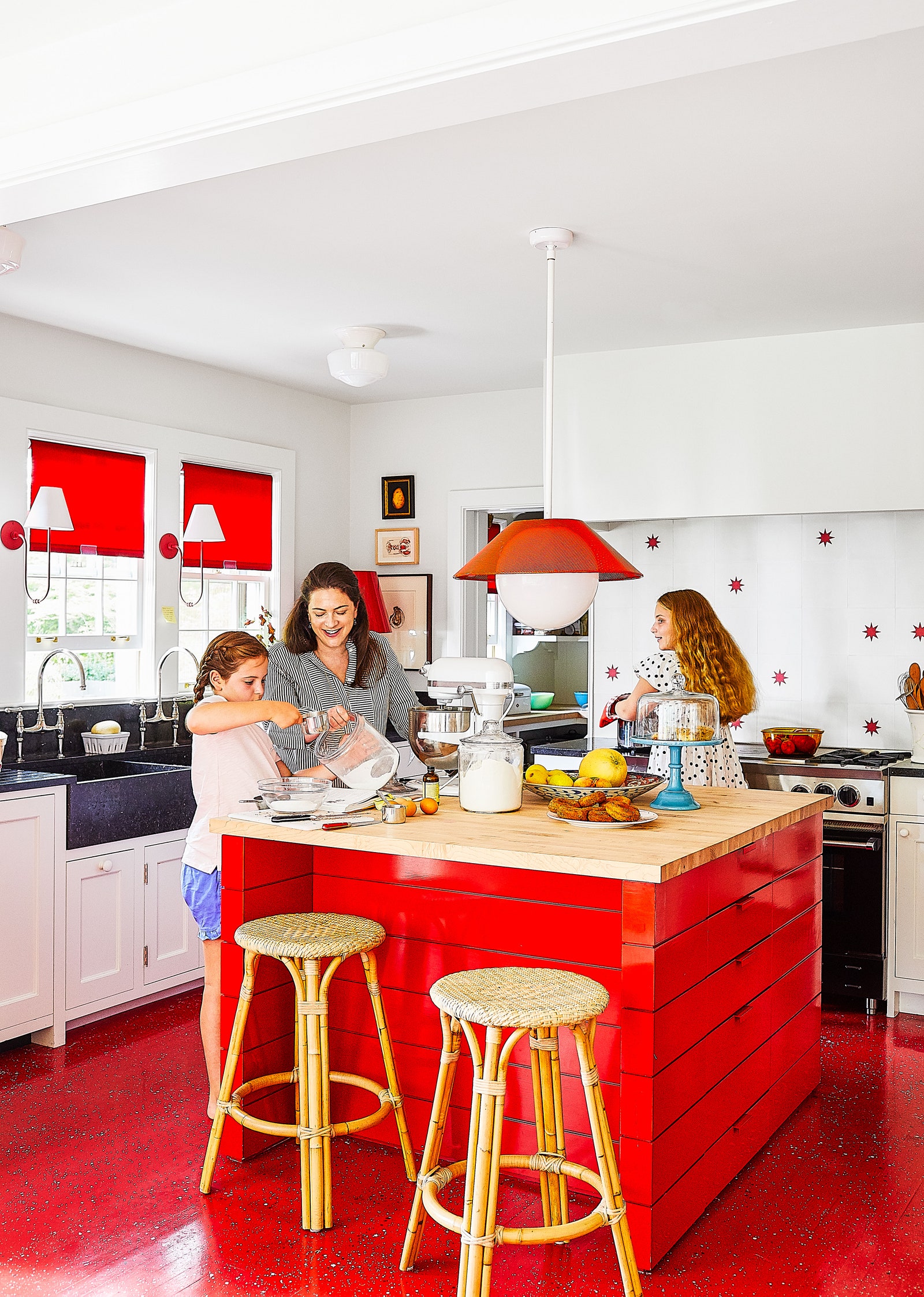 Old favorites were supplemented with what Brodsky terms “a few grand gestures” inspired by “great American masters—Tom Scheerer, Jeffrey Bilhuber, and Bunny Williams.” She is fortunate that those designers are also her friends. “When I was thinking of having that 17-foot-long sofa made for the sunroom, I called Jeffrey and asked him if he thought that would be too big. He replied, ‘God, no, darling, that’s practically a car seat!’ ” Nonetheless, it took a fearless soul to cover that giant sofa in a pink-and-cream graphic pattern and then set it atop a rose-and-white checkerboard painted floor.

Painted floors are a feature throughout, and Brodsky worked closely with color consultant Eve Ashcraft. “People remember this house as being much more colorful than it really is,” Brodsky adds. “In fact, most of the walls are white.”

Even the more formal rooms evoke bygone leisurely summer afternoons. “One of the joys of putting together this house was that I got to use practically everything I had saved in my fantasy files,” Brodsky explains, “including the Lee Jofa fabric on the living room sofa.” A dining room mural by Bob Christian, one of the grandest gestures, evokes a magical meadow where every flower blooms at once.

“When we come out here, we don’t socialize,” says Brodsky. “We just hang out, and I get to cook, which I don’t really do in the city anymore. To me, it’s a romanticized version of what the Hamptons might have been like 50 years ago.”